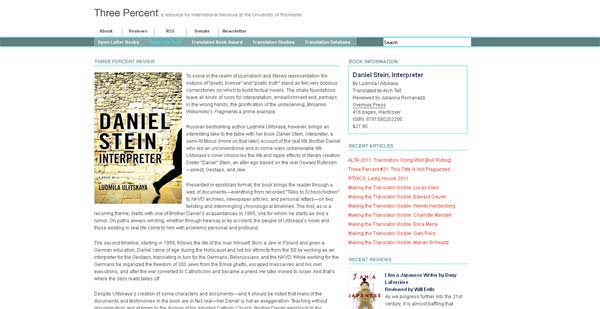 To some in the realm of journalism and literary representation the notions of “poetic license” and “poetic truth” stand as two very dubious cornerstones on which to build factual novels. The shaky foundations leave all kinds of room for interpretation, embellishment and, perhaps in the wrong hands, the glorification of the undeserving, Binjamin Wilkomirki’s Fragments a prime example.

Russian bestselling author Ludmila Ulitskaya, however, brings an interesting take to the table with her book Daniel Stein, Interpreter, a semi-fictitious (more on that later) account of the real life Brother Daniel who led an unconventional and in some ways unbelievable life. Ulitskaya’s novel chronicles the life and ripple effects of literary creation Dieter “Daniel” Stein, an alter ego based on the real Oswald Rufeisen—priest, Gestapo, and Jew.

Presented in epistolary format, the book brings the reader through a web of documents—everything from recorded “Talks to Schoolchildren” to NKVD archives, newspaper articles, and personal letters—on two twisting and intermingling chronological timelines. The first, as is a recurring theme, starts with one of Brother Daniel’s acquaintances in 1985, one for whom he starts as only a rumor. On paths always winding, whether through hearsay or by accident, the people of Ulitskaya’s novel and those existing in real life come to him with problems personal and profound.

The second timeline, starting in 1959, follows the life of the man himself. Born a Jew in Poland and given a German education, Daniel came of age during the Holocaust and hid his ethnicity from the SS by working as an interpreter for the Gestapo, translating in turn for the Germans, Belorussians and the NKVD. While working for the Germans he organized the freedom of 300 Jews from the Emsk ghetto, escaped massacres and his own executions, and after the war converted to Catholicism and became a priest. He later moved to Israel. And that’s where the story really takes off.

Despite Ulitskaya’s creation of some characters and documents—and it should be noted that many of the documents and testimonies in the book are in fact real—her Daniel is not an exaggeration. Teaching without discrimination and at times to the dismay of his adopted Catholic Church, Brother Daniel went back to the teaching of God before the split of Judaism and Christianity. In the midst of writing a biography Ulitskaya gives an insightful and at times comical and cathartic look at tensions in and beyond Israel—of faith, of lifestyles, of ecclesiastical orders and families.

With the whole of his life he raised a heap of unresolved, highly inconvenient issues which nobody talks about: the value of a life turned into mush beneath one’s feet; the freedom which few people want; God for whom there is ever less room in our life; and life which has closed in on itself. Have I packaged that temptingly?