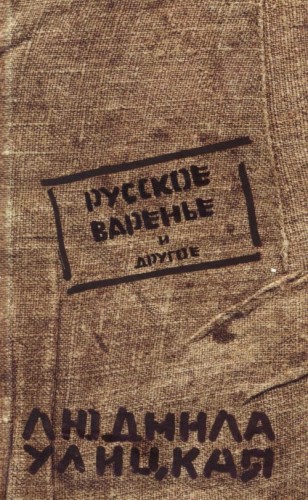 Russian Jam and Other Plays by Lyudmila Ulitskaya

Lyudmila Ulitskaya is a major contemporary Russian novelist, short-story writer and screenwriter, the winner of countless international literary awards, and a recognized playwright of some note in her native Russia and much of Europe. While she has been translated into over twenty languages, only about half of her work has been translated into English, and there have been no published English translations or notable American productions of her plays. The recent publication of the English translation of her novel Daniel Stein, Interpreter – her most ambitious and highly praised book to date – may spark a greater interest in her oeuvre in the English-speaking world and lead to the translation of some of her dramatic work. In the meantime, Russian readers can find three of her most famous plays in the 2008 collection Russian Jam and Other Plays, printed by Eksmo Publishing. Some of her plays have also been translated into German and French.

Of the three plays included in Russian Jam and Other Plays, this article will only focus on the eponymous play in the collection. As in much of Ulitskaya’s work, it paints a picture of a modern Russia in which the present is always in dialogue with the past, as one informs the other while being in constant comparison with it. In the play this occurs on a thematic/metaphorical level, as different generations try to decide what is to be done with the family dacha, with some basing their arguments on sentimental, historical considerations and others on material, future ones. The past thereby either gets buried and forgotten, remembered selectively, or completely distorted. Ulitskaya thus chronicles the battle raging over Russia’s history among the various parties who claim exclusive rights to it.

Subtitled “afterchekhov” when produced by Moscow’s School of Modern Drama as part of its repertoire, the play immediately presents itself as being in dialogue with the history of Great Russian Drama. Deeply influenced by Anton Chekhov’s The Cherry Orchard, among other works of classic Russian theater and literature, the play is set in the year 2002 inside and around a summer dacha in a village formerly reserved for Soviet academics. Built by their father, a recipient of the Stalin Prize, it is now owned and occupied by a brother (Andrei Ivanovich Lepehen, pensioner and former Professor of Mathematics) and sister (Natalya Ivanovna, translator and family genealogist) in their sixties, along with their extended family. This includes Natalya’s three daughters Varvara, Yelena, and Liza, Yelena’s husband Constantine, and Natalya’s sister-in-law Maria Yakovlevna. Rounding out the cast are Natalya’s oldest child Rostislav and his wife Alla (two successful Muscovites), the local handyman and “simple person” Semyon Golden Hands, and a cat in heat who spends the entire play howling in a tree and refusing to come down.

The basic conflict in the play is the fate of the dacha. Everyone who lives in the dilapidated country house in a decaying village wants to hold on to it for various reasons: Andrei and Natalya because of their sentimental attachment to it, the daughters out of laziness and helplessness, and Maria because of her devotion to the family. On the other side of the argument are Rostislav and Alla, who want their family to move out for financial considerations and a decidedly bourgeois-materialist vision of the future. Unlike the rest of their family, the entrepreneurial Muscovites know that the dacha will soon be destroyed to make way for an underground metro station and eventually an amusement park, which will raise of the value of the property exponentially. Rostislav has a lofty vision for this amusement park, which he believes is a noble endeavor because of the joy that it will bring to so many families (and the money it will bring him). Ulitskaya’s ironic comparison here is with Peter the Great’s vision of future St. Petersburg in Alexander Pushkin’s The Bronze Horseman. Both the Czar and Rostislav believe they are creating something for the good of the Russian people, and the capitalist Rostislav sees no reason why he should not receive any personal gain from this undertaking.

If the connection with The Bronze Horseman is implicit, the play’s parallels to The Cherry Orchard are decidedly explicit, as Ulitskaya compares the fate of the Russian bourgeoisie and intelligentsia on the eve of the revolution with those in its wake. As in the Chekhov play, those who uphold the values of a disappearing era in Russian Jam spend their time debating issues of ethics, morals, beauty, and history while being pushed out by people of action who have no concern for such questions. The Soviet intelligentsia is brushed aside to make way for the New Russians, who are solely interested in the value of money. Semyon Golden Hands is similarly reminiscent of Lopakhin in his dueling instincts of compassion and avarice towards the Lepehens. Though he warns them repeatedly to leave the village and does his best to help keep the dacha going, Semyon also persuades them to buy an unnecessarily luxurious door for their outhouse from him when he is unable to fix the plumbing and makes a great deal of money himself from the property by first buying the land from Andrei and then selling it to Rostislav for double the price. In a final ode to Chekhov, the family forgets to take the cat with them when the dacha is destroyed. Like the decrepit butler Firs, the cat too becomes an innocent victim of social upheaval.

Just as a dubious notion of progress becomes the deciding factor in the fate of the dacha, the land itself functions as both a contested site and battleground of Russian history. We learn that the aristocracy cultivated the area and filled it with orchards and greenhouses before the Bolsheviks came and destroyed all of their efforts. The Party later gave the land to distinguished academics like Lepehen père, who brought back the orchards and greenhouses, and now they are once again falling into disrepair and will soon disappear entirely. Natalya herself thinks that her family is descended from Fourteenth Century Boyars and Mongol invaders, and through them possibly even to Napoleon. Though Andrei laughs at this theory and says that it was Napoleon’s barber, Natalya firmly believes that they are related to Decembrists and other famous Russians like Kutuzov and Turgenev and that she could prove her family’s relations to the original Russian Kings if only she had the time.

Ulitskaya both mocks and laments the cyclical nature of Russian history. Varvara is a religious fanatic who does nothing but sleep and go to church, forever decrying the present (with its wanton materialism and lack of spirituality) and praising the past, while telling everyone how she wants to live a life of purity away from the modern world. Andrei, a cynic and skeptical man of science, tells Varvara that she is wrong to idealize the past: it was bad then too. When Varvara complains that Alla is Jewish, Liza jokes that she will contaminate the family’s noble blood. Like the religious anti-Semitism of Imperial Russia, Ulitskaya worries that the resurgence of the Orthodox Church is leading the nation back to its pre-Soviet roots. As symbolized by the Lepehins, her vision of contemporary Russia is one of decay. The youngest daughter Liza jokes that Andrei and Natalya are beautiful and brilliant, whereas Natalya’s children have gotten progressively worse, resulting in her being short, fat, and diabetic, with bad eyesight and a weak heart. The family further laments that Natalya is forced to make a living translating Alla’s books, which they consider poshlost, when they were raised on Great Literature. Not only does Alla pay her very little for the translations, the money and effort seem to be wasted since it is unlikely that any of her books will sell in America, a problem that the playwright unfortunately continues to experience with her plays.

Oleg Ivanov would like to thank his mother for her help with this article.