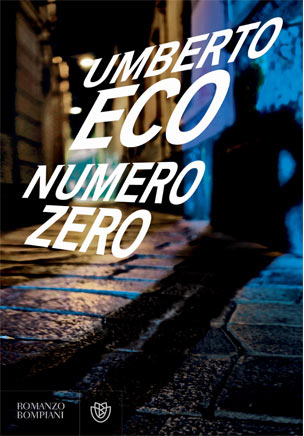 Those who follow the various titbits around the Italian writer’s literary output might remember that after finishing The Island of the Day Before, Umberto Eco began writing a novel about a group of journalists who start a daily newspaper. In search of popularity and influence, the editors of the rag concoct false sensations not unlike the bored intellectuals from Foucault’s Pendulum who spawn a monstrous fictional plan of the world domination. After two years of work, Eco abandoned the novel to write Baudolino, which also dealt with lies, mythmaking and forgeries, albeit in the medieval setting.

Prof. Eco did manage to finish Numero Zero, and it was published by Bompiani in January, 2015.  Although the main setting of the novel is Milan in 1992, the book also touches upon the mysteries and tragedies of the 1970s: the clandestine NATO operation Gladio, the notorious Masonic lodge Propaganda Due, the failed neo-fascist coup  Golpe Borghese, the terror of Red Brigades, and the death of Pope John Paul I. On top of that, Eco’s book tells about "corrupt secret services, massacres and red herrings" as well as "a shocking plan". The novel was presented at the Frankfurt Book Fair with the English title That’s the Press, Baby..., referring to the famous last words of  Humphrey Bogart’s character in Deadline.

A mish-mash of journalists who cobble together a daily paper concerned not so much with information, but blackmail, mudslinging, and cheap stories. A paranoid staff writer who, roaming round a hallucinatory Milan (or hallucinating in a normal Milan), reconstructs fifty years of history in the light of a sulphurous plot built around the putrefying corpse of a pseudo Mussolini. In the shadows lurk the secret right-wing organization known as Gladio, the P2 Masonic lodge, the supposed murder of Pope John Paul I, the coup d’état planned by Prince Junio Valerio Borghese, the CIA, red terrorists manoeuvred by the secret services, and twenty years of slaughter and smoke screens. A set of inexplicable events that seem pure fantasy until a BBC programme proves they are true, or at least that the perpetrators have confessed to them by now. A corpse that suddenly shows up in Milan’s narrowest and most disreputable street. A tenuous love story between two born losers, a failed ghost writer and a disturbing girl who in order to help her family has dropped out of university to specialize in gossip about romantic attachments, but who still cries when she listens to Beethoven’s Seventh. A perfect manual of bad journalism in which the reader gradually begins to wonder whether it is all make believe or simply true to life. A story that unfolds in 1992, a year that foreshadowed many mysteries and follies of the successive twenty years, just as the two protagonists think that the nightmare is over. A bitter and grotesque episode that takes place in Europe in the period spanning the end of the war and the present day – and one that will leave the reader feeling every bit as much of a loser as the two protagonists.