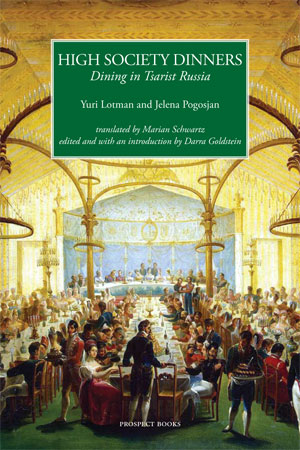 High Society Dinners offers extraordinary insight into the domestic arrangements of the Russian aristocracy, presenting six months' worth of menus served in St Petersburg to the guests of Pavel Durnovo (1804–64), Grand Equerry to the Tsar, businessman and politician, part of an important late-19th-century dynasty that included ministers and high officials.The menus themselves would be useful enough for what they reveal about culinary culture in Russia, but it is the academic commentary in the introductory essay Yuri Lotman and Jelena Pogosjan that is so invaluable, dissecting the choice of dishes, the dining rituals and the social circles of the participants.

The second part is a transcript of one year's menus and guest lists interspersed with extracts from family letters and journals. This section was undertaken by A.A. Kononov and M.A. Gordin. Taken with the extensive contemporary illustrations, it sets in context the domestic and gastronomic underpinnings of life in this group at the heart of the Russian empire.

The Russian has been finely translated by Marian Schwartz (who has worked with M. Gorbachov and translated works by Tolstoy, Bulgakov and Lermontov) and the book as a whole is annotated and introduced by Darra Goldstein, formerly editor of Gastronomica, professor of Russian Studies and author of books about Russian and Georgian food.

Straight Line is a debut Makanin´s novel published in 1965. In it, Makanin recounts a love story of a young Soviet scientist Vladimir, and his older colleague Emma.

Fazil Iskander is the author of multiple short stories and novelettes. He has published over 20 collections marked by vividness and fresh, graphic imagery.

Lyrical and humorous, deeply national but concerned with the human condition at large, often about children but mainly for adults, Fazil Iskander's writing abounds, like his native Abkhazia, in colour and contrasts. It is merriment and toil that make the earth beautiful, Iskander writes in one of his stories. These qualities are also typical of his characters, most of them drawn from his fellow countrymen, ever a mixture of gallantry and guile, humour and hard work. -- R.Daglish